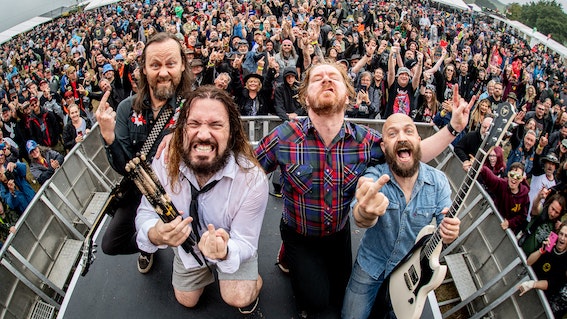 A new dawn broke in Black Spiders world, with the release of the new record in March 2021, one where the sun never sets, the party vibe is set to ‘high’ and the drinks are on you……

Confidence has grown in the band, with a new album and some new blood, so it was time to try these new songs out in the rehearsal studio. Due to constant cancellations of other gigs, the band set about looking at a good time to set up some small club dates to get back into the swing of things, once restrictions were going to be lifted and managed to put together a week of gigs.

They have every right to be proud of this new album. Against all of the odds, Black Spiders have crafted a record that features thirteen tracks of high-energy, feel-good rock n’roll, contrasted by demonic doom that despite the disjointed, isolated way it was recorded (even second guitarist Mark Thomas, in lockdown in Spain, recorded his parts remotely), sounds like a band, firing on all cylinders, sweating it out in a dark and dank practice space with lyrics that perfectly document these insane times we are living through.

Kicking off with the aforementioned ‘Fly In The Soup’ single, the band also released their version of the Easy Beats classic ‘Good Times’ at the start of 2021, to loud cheers and spilt beer. This third self-titled long-player wastes no time in grabbing you by the scruff of the neck and dragging you through an album where good times are forever, hooks and riffs are not in short supply and the doom-drenched likes of ‘Wizard Shall Not Kill Wizard’ and the psychedelic groove of album closer ‘Crooked Black Wings’ give us an album (that hit the rock charts at number 9) of many moods and dynamics and a reason to be cheerful in 2021 and forevermore…..

‘Give Em What They Want’ was released on 16th July 2021, along with the vinyl release of the album via Record Store Day on Sat 17th July, which took the band back into the rock charts for a second time at 28…

Due to the pandemic the band were unable to follow this release with a tour only able to play a warm up show and Bloodstock festival n August 2021. The bands tour in November 2021 was cut short, when singer Pete came down with the Plague and the dates were cancelled after 4 shows….

Undeterred the band decided to plough on and finished off the harsh recording schedule they had set themselves.

Now, with yet another new album recorded to follow next year, 2023. God have mercy on your souls….

Play Loud. Black Spiders are back.