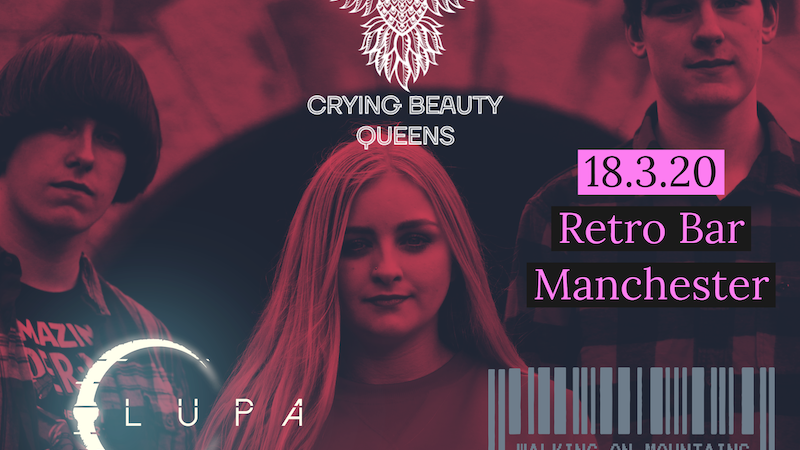 CRYING BEAUTY QUEENS
Crying Beauty Queens are an atmospheric alternative rock band based in Manchester. Taking influence from Fugazi’s melodies mixed with The Pixies’ dynamics and a Cranberries kind of mood, they provide something unique to the Manchester Music Scene.

LUPA
Lupa’s distinctive electronic rock sound is a fusion of Drum and Bass and Rock Music, best described as the angry rock obsessed lovechild of Paramore and Chase and Status. The force behind the music is only exaggerated by Lupa’s explosive live performance, the soaring synths, the monstrous bass lines and the anthemic choruses represented by the domination of the stages they play. As with any rock band, as much time and commitment goes into the craft of the live performance as goes into the music to maintain an enthralling live show. In Latin, Lupa means ‘She-Wolf’ which could not be more appropriate for such a feisty, female fronted, explosive band.

Lupa are fierce controllers of their own destiny, if you want your own voice you have to use your own mind, and if the path is easy and well trodden it probably doesn’t lead anywhere good. Do not let who your are and what you have to say become diluted by the pressures of today’s society and the assumed dependence on big industry.
Stand tall, shout loud and fight for yourself!