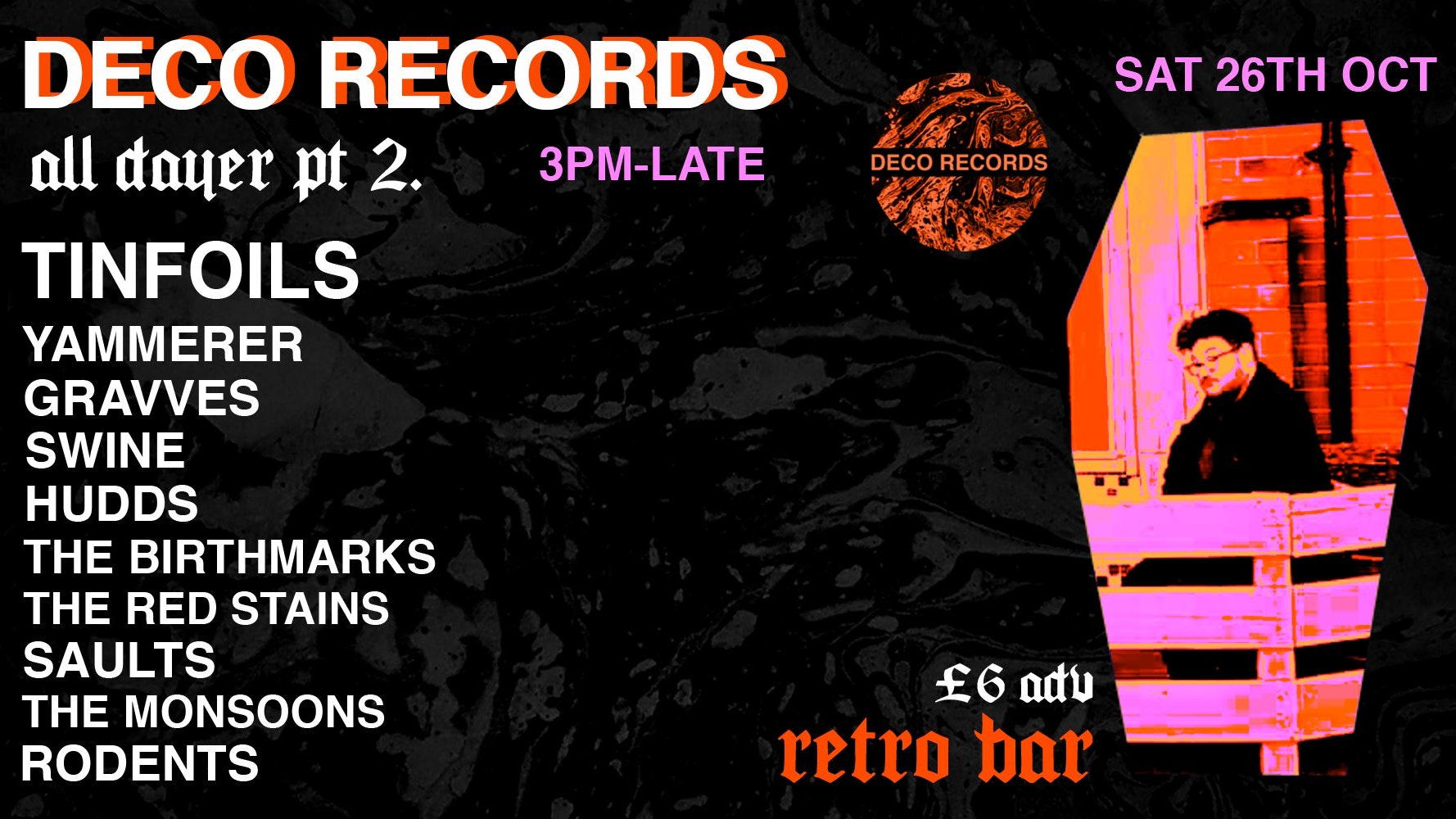 We will be doing another of our world famous (well nearly) 10 band line-ups at Retro in the autumn with one of our old favourites in the top spot with prizes for the best fancy dress.

Tinfoils frantic brand of ‘no frills’, DIY guitar-driven music rages against the private security companies who police the streets of Britain, the royalist media machine, and youth debt – as well as having the odd song about thrush.

Since taking to the stage in early 2018 the band have headlined a number of sell-out hometown shows, as well as a string of gigs and festivals across the North of England, with highlights including supporting bands such as HIMALAYAS and The Mysterines, and checking off some of Manchester’s most prestigious live music venues. The band recently released their latest single “Call of the Abyss” on their own label, Foilwrapped Records, along with a sell-out launch party gig.

Born in Yorkshire but made in Manchester, Tinfoils are predominantly influenced by contemporary bands such as IDLES, Sleaford Mods, Thee Oh Sees, and Cabbage, but also take inspiration from a number of 20th century punk and post-punk bands such as Buzzcocks and The Fall. Manchester Evening News describes the band’s music as “sarcastic, satirical and extremely danceable.”

Growing from improvisational roots, Yammerer have developed their psychedelic post-punk sound into a multi-limbed monster; captivating audiences with a raw and earnest approach.One dose of madcappery from the many-limbed beat combo that is Yammerer will leave you smitten.

Punk three-piece hailing from North Wales. Drawing from many influences their music if full of energy and straight to the point. Dark, abrasive songs are evened out with witty, tongue in cheek, image provoking lyrics. With hooks and riffs resembling the primary colours in a painting, your eyes are drawn towards the bold bright colours that might seem simplistic at first until you look closer and see the finer details that flesh out and complete.

Signed to Liverpool based label Loner Noise Records, releasing debut EP “Rattle” in 2016. Since then they have been gigging regularly around the UK and performing at festivals such as Y Not Festival, Focus Wales, Wrong Festival, Threshold and Tramlines as well as support slots with established acts including Slaves, Nothing But Thieves, DZ Deathrays and Vant

Raw vocals over heavy riffs that creates a hyper sound you cant resist to jump around to.

HÜDS have debuted their first full release single in march of 2018; with further release to follow from a selection of material recorded in late 2017 and early 2018 as the year progresses.

The group has played consistently in the Birmingham and Wolverhampton music scenes for the last 18 month and we are really excited to bring them up to Manchester this October.

https://permanentslump.bandcamp.com/album/no-slash-epMarc Riley favourites The Birthmarks are a five piece from Manchester. Their new EP “No Slash”, released in July (link above), is a brilliant piece of lo-fi jangle wonk with the skuzz of Let’s Wrestle, the monotony of The Rebel, a garagey 13th Floor Elevators psychedelic edge and the sense of fun of Terry. It’s a worthy follow up to their also great 2017 album Yawn/Sigh.

“The Manchester band most likely to inspire a whole generation of guitar-wielding girl groups. – adolescent energy with the sort of surreal, scabrous humour Mark E Smith would have been proud of.” David Sue, Manchester Evening News

We’re the ones with summat to shout about. Try all you might but you can’t wash us out. Themes include trolley dashing, public transport and gin stealing with lots of soupy bass and bleeps inbetween.

We were blown away at The Railway in August, great to get these guys back so soon

Loud, angry and in your face. The Monsoons are ready to take the city by storm with their punk-fuelled chaotic message.

This Upcoming punk/post-punk band will be opening our little line-up – get down early to catch them.