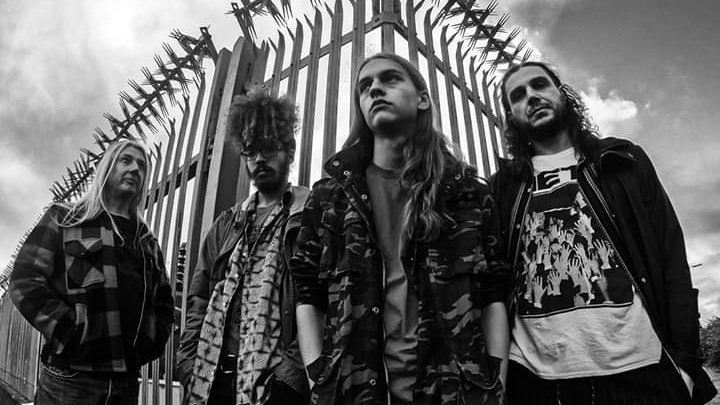 Based out of Bradford, British Psych Grunge band INNADAZE was formed in the summer of 2018, taking inspiration from the battered rock trappings of ’90s grunge and the noisier side of shoegaze’s textural guitars. The group plays taut, angular melodies with a collision of thick fuzzy guitar riffs that turn-on-a-penny with precision and muscular impact, hitting hard. 2018 found them refining their noisy rapport and completing the bands line up.

INNADAZE was formed in Bradford, West Yorkshire by guitarist/vocalist Enzo Annecchini, drummer Billy Lockwood and guitarist Daniel Greenhalgh, who’s paths intertwined and came together through frequenting friends with similar tastes in edgy and uncompromising music. A short while after, Ato Leo Ame was recruited on bass after seeing the band play at a mutual friend’s party at the 1 in 12 club without a bassist and insisted that he was the bass man that could fill the missing frequency. It was around then that they really began to knock their sound into shape – a sound that draws on wiry rhythms and fuzz-laden, high-volume production — and released their first single “Wild as Love” through New York based digital platform Tunecore.

After releasing their self – titled demo, INNADAZE began to play more and frequent gigs in and around Bradford, Leeds, Manchester and Liverpool, learning their trade and paying their dues for the most of 2019 which has seen the band gaining a reputation as a powerful live act. Adding to the momentum of their growing profile, Alan Raw from BBC Introducing Leeds aired a couple of their tracks ‘What is it I Gotta do?’ and ‘Beyond The Sky’ `describing the band’s music as a Big sound with big fuzzy guitars.

Now that 2020 has arrived the band are relishing the opportunity to reach out further afield to showcase their new self titled EP with its hulking giant tracks that align and progress all of the band’s best qualities – a crushing, intense rhythm with inventive, snaking guitar work and soaring vocal melodies. This release is scheduled for February 21st 2020 and will coincide with a new animated video – the bands second in the same vein of their previous ‘Wild as Love’ video.