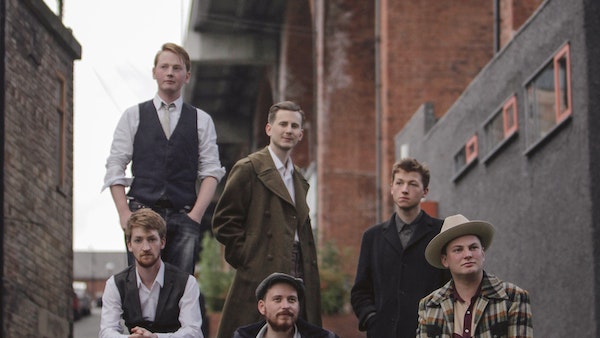 Rob Heron & the Tea Pad Orchestra are one of the hardest working bands in the UK
roots circuit.

With thousands of touring miles under their belts, they have earned themselves a sizeable fan base in the UK, Europe and beyond. Based in Newcastle Upon Tyne, they play their own brand of Western Swing, Blues, Gypsy Jazz and Country, or “North Eastern Swing” as they’ve coined it.

Their style is more eclectic than most, influenced by early 20th century American music, with the addition of “razor-sharp” solos, great arrangements and original songs; their music harks back to a golden age whilst staying perfectly modern. The songs are penned by Rob Heron, a crazy fool for country music and a full time dandy-cowboy. His songs are full of character, satire, and good old fashion hollerin’.

Their debut album, ‘Money Isn’t Everything’, caused a sensation when it was released in 2012, winning a host of rave reviews – many of them 5-star. Their second album, “Talk About The Weather” (released July 7th 2014) is also gathering some notable radio play and reviews.

“Rob Heron evokes the spirit of Bob Wills and Django Reinhardt with a quintet that shuffles and boogies with panache. Infectiously good-humoured” – Uncut Magazine

“Amazing musicians who play with both passion and a sympathetic regard for the history of the genre.” – Maverick Magazine

“On this, their second album of skewed Texas swing, gypsy jazz and hot, humorous country blues they’ve added reeds and horns for a big, thick sound, but their spontaneous combustion is always unstoppable. – Scotsman On Sunday