The Velveteers & The Pearl Harts 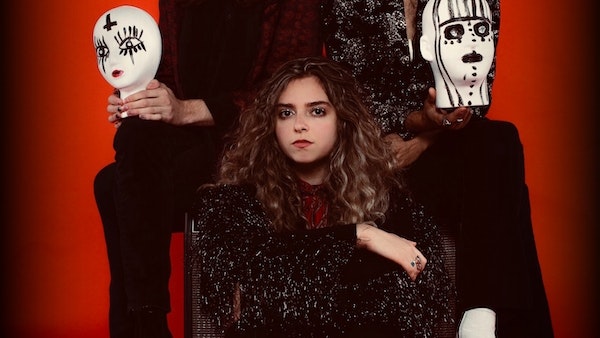 The Velveteers are an American Rock trio from Denver, Colorado that is the epiphany of punk with the aggressive sound and grungy wisdom that transcends through 21 year old guitarist and lead singer Demi Demitro and her two drummers. Through fuzzed out guitar riffs and thunderous drums they lure their audience with vibes that come right out of a classic horror flick, the band is often compared to the likes of The Stooges, T.REX, and Led Zeppelin. In 2018 the band released their self-titled debut EP and have since been busy on the road touring. The Velveteers have supported bands such as Julian Casablancas and The Voidz, Deap Vally, Chicano Batman, and CFM to name a few. Most recently The Velveteers completed their first UK headlining tour after previously supporting Deap Vally in the UK back in 2016. The Velveteers are currently getting ready to record their first LP in 2019.

They began as a sibling duo with Demi Demitro on guitar at age 17, and brother John on drums.
Whilst the world has seen a succession of drum-guitar duos come and go since Meg and Jack started
doing their thing, The Velveteers managed to exploit a loophole that allows them to explore their obvious love of 70’s prog and glam, as well as indulging later punk influences. More recently they have added a second drummer in the form of Adrian Pottersmith (age 20), and in doing so have created something completely unique, not least through the way in which their two kits have been partly morphed together. The two sticks men now not only conjoin to create the rhythms but are also forced to share cymbals. The result is an aggressive primal sound, a thundering syncopation that spars against Demi’s vocals and distorted guitar for attention, and produces a listening experience like being slammed by a ten ton truck.

The bond between The Pearl Harts existed before they had even played together. Meeting on the road whilst playing in other bands, Kirsty and Sara ran away from their previous lives and now describe themselves as outlaws.

Born out of love and a desire of heavier music they burst onto the scene with a stunningly filmed live track and accompanying video, ‘Black Blood’ immediately picked up fans from XFM, Clash, Artrocker and BBC Introducing.

The band quickly made a name for themselves with their wild attitude, DIY spirit and incredible live shows.  Described as “the love-child of PJ Harvey and Nine Inch Nails” and “Queens Of The Stone Age played by The Runaways.  The Pearl Harts raw energy and intense delivery has won them fans across the UK and Europe.  As one live reviewer put it

“All you can think to do is ask them out for ice cream and all they want to do is wreck your house and firebomb your car.”

Garbage’s Shirley Manson had other plans though. After discovering the girls online she fell instantly for their raw and honest energy. Contacting them personally, she asked the band to be sole support for their 2016 European tour. Since then she hasn’t stopped telling Garbage’s 1 Million Facebook followers, and anyone else that will listen, that they are ‘Badass girls with all the right stuff”

Such a feat shouldn’t normally happen to a band so early in their career, but at the beginning of 2017 The Pearl Harts found themselves on the road again, this time as special guests to Skunk Anansie on their 6-week European tour.  They released fast and furious ‘Hit The Bottle’ to accompany the tour to critical acclaim – and were soon asked for the track to be used on US TV network Fusion TV.

Following funding from Help Musicians Emerging Artists Fund and Pledge Music, the bands first full-length LP release ‘Glitter and Spit’  was released in March 2018 through their own label Double Bang Records.  So far picking up raving both on music blogs and in the music press ‘Glitter and Spit’ has been described as ‘Full of Attitude, charisma and confidence – it takes the listener on an adrenaline-charged ride.’ And has seen the girls interviewed by BBC Radio 6, playlist on Radio X and Kerrang! TV.